What is psilocybin microdosing?

Psilocybin microdosing means taking very small amounts of psilocybin. People who microdose may avoid hallucinations but still experience other positive effects. As scientists continue to study the effects of microdosing, some studies show that it has positive effects on anxiety and depression.

What are the key psilocybin laws?

The federal Controlled Substances Act (CSA) schedules certain drugs into one of five schedules. Psilocybin is a Schedule I substance, meaning that it is illegal to possess, obtain, or produce. The feds believe psilocybin has no currently accepted medical use, a lack of accepted safety for use under medical supervision, and a high potential for abuse. This is pretty crazy (the FDA seems to believe otherwise), but it’s where we are.

As of today, no state has fully legalized psilocybin (Oregon did, but the program isn’t live yet). Many jurisdictions have decriminalized psilocybin, but that just reduces penalties and/or directs police not to prioritize enforcement. Like with cannabis, even statewide legalization can’t change federal law. But unlike with cannabis, we have no idea what the federal government will do when states roll out psilocybin programs. 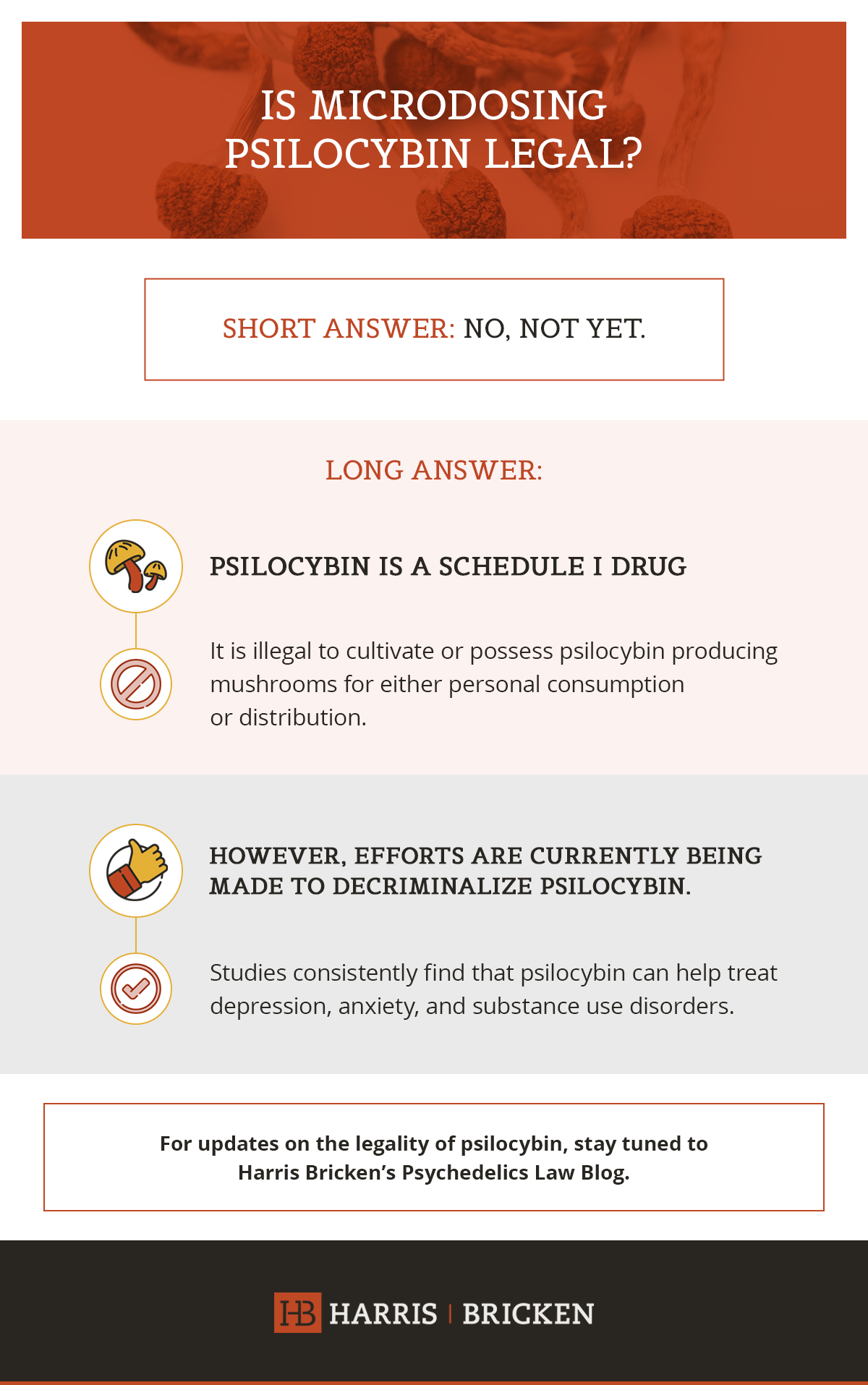 The short answer is no. The CSA schedules the chemical psilocybin with no thresholds. A large amount is as illegal as a small amount, though penalties may be different. Persons who microdose psilocybin in cities (for example) that have decriminalized it may be at lesser risk of local prosecution, but that’s it. Federal and even state authorities may still prosecute even microdosing. And there’s no protection at all for commercial activities.

What if psilocybin microdosing is for medical or religious purposes?

The CSA and state laws have no medical exemptions. Thus, even if a state law were passed with such carve-outs, that wouldn’t change federal law at all.

The religious use question is more complex. I’ve written quite a bit on this (see here, here, here, and here). In a nutshell, the First Amendment protects religious practices and that can include psychedelic use. The caveat is that DEA requires petitions for exemptions to the CSA. And of course, these are basically never granted. There are active court challenges to this process underway. But microdosing, even for religious purposes, is a risk. In conclusion, the answer to the question of whether microdosing psilocybin is legal is “no, at least not yet.” Stay tuned to the Psychedelics Law Blog for more updates.