Psilocybin mushrooms, also called magic mushrooms, are psychedelic drugs that can lead to hallucinations and altered thinking. The laws around psilocybin can be challenging to keep up with since there is some ambiguity and confusion between federal, state and local laws. As psychedelics are growing in popularity across the country for therapeutic, medicinal, spiritual, and recreational purposes, understanding the laws is crucial for avoiding penalties and staying within your rights.

Psilocybin is a naturally occurring drug found in over 200 species of fungi. Some compare its effects to that of drugs such as:

Users of psilocybin can experience negative reactions, ranging from dependence to overdosing. Ostensibly because of its perceived potential harm, the drug was included in the Controlled Substance Act enacted by the 91st United States Congress and signed into law in 1970. Psilocybin is a Schedule I substance, meaning the federal government deems it to have a high likelihood of abuse and addiction and no approved uses.

In recent years, researchers have completed clinical trials using psilocybin-assisted therapy for treatment. The results were that the drug could benefit individuals suffering from post-traumatic stress disorder and depression. In addition micro-dosing psilocybin has become more and more common. As psilocybin enters the mainstream, it’s important to recognize federal, state and local laws and possession penalties.

Psilocybin (the chemical), psilocybin mushrooms, and anything containing psilocybin are illegal at the federal level and in every state in the United States.

I know, I know, a few cities and the State of Oregon have decriminalized some psychedelics, but decriminalization does not create any kind of legal, regulated market. And yes, Oregon will eventually have a regulated market but not until at least 2023. And, of course, there are a few companies who are paving the way with research under FDA auspices, but that doesn’t create a legal market either. So today, selling psilocybin just isn’t legal.

In spite of all of this, where there’s a law, there’s always a budding entrepreneur trying to find a loophole . . . but probably breaking that law. And that’s where we get to the question of whether psilocybin kits are legal. Spore kits allow people to cultivate psilocybin but generally don’t contain the drug. So the argument goes that because spore kits are psilocybin-free, they must be legal, but there are a lot of problems with this argument.

Let’s first look at federal law. Under the Controlled Substances Act (CSA), psilocybin is a Schedule I narcotic alongside heroin. “But spore kits don’t have any psilocybin!” one might say. Well, the CSA prohibits the knowing or intentional “manufacture” of a controlled substance. 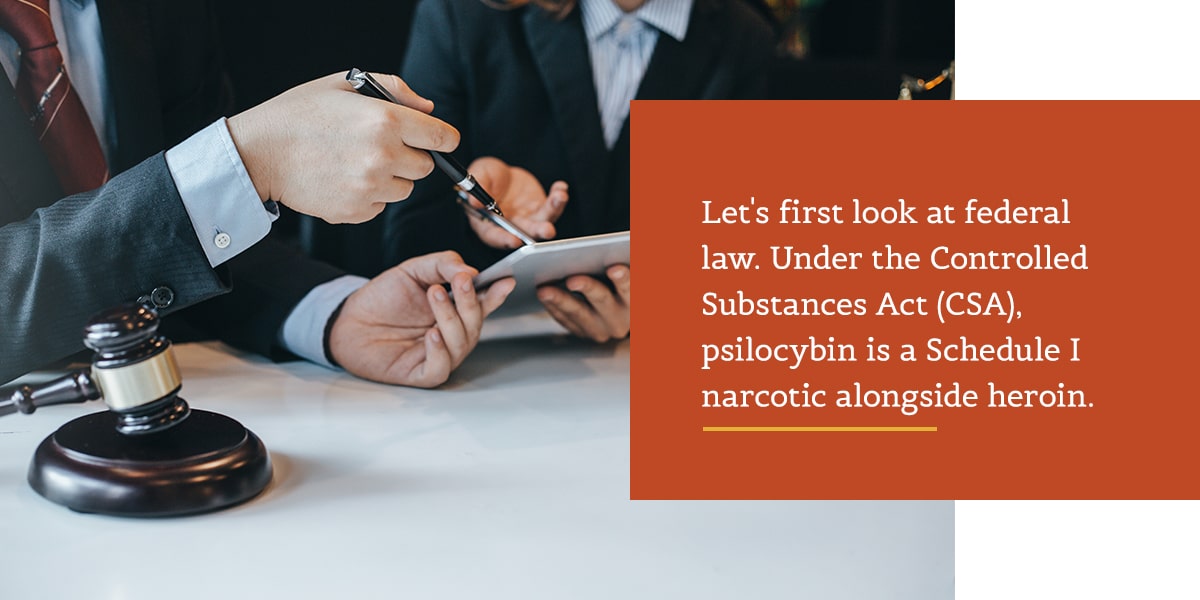 The CSA defines “manufacture” to include “production,” which in turn is defined to include “cultivation, growing, or harvesting of a controlled substance.” So while a spore kit may not contain psilocybin per se, the use of the spore kit to cultivate psilocybin mushrooms probably violates the CSA.

Selling a spore kit likewise is an issue for a number of reasons.

What about the states? Every state is different but generally will have laws similar to the CSA relative to things like paraphernalia, attempts, etc.

While cannabis-friendly states may provide exemptions for cannabis accessories from criminal paraphernalia charges, that certainly doesn’t apply to psilocybin paraphernalia. Some states like California go the extra step and do things like this:

[E]very person who, with intent to produce [psilocybin], cultivates any spores or mycelium capable of producing mushrooms or other material which contains such a controlled substance shall be punished by imprisonment in the county jail for a period of not more than one year or in the state prison.

Every person who transports, imports into this state, sells, furnishes, gives away, or offers to transport, import into this state, sell, furnish, or give away any spores or mycelium capable of producing mushrooms or other material which contain [psilocybin] for the purpose of facilitating a violation of [the prior paragraph] shall be punished by imprisonment in the county jail for a period of not more than one year or in the state prison.

So in sum, it is illegal to cultivate spores in California that are even capable of producing psilocybin, and it’s likewise illegal to import or sell such spores.

There’s a lot of misleading information online about spore kits (big surprise), but the bottom line is that even though federal law doesn’t explicitly mention spore kits, that does not mean they are legal. In fact, there is sufficient law that the federal government could latch onto to claim they are not legal. Moreover, states generally have similar laws, and some expressly call out spore cultivation.

Possession or knowledge of possession of a controlled substance can result in various penalties depending on factors like:

Since psilocybin is a Schedule I drug, its penalties can be severe and may include:

In addition to these legal punishments, a convicted person could also have to participate in diversion programs that may involve behavior modification or drug counseling. In some states, a drug offender may be sentenced to a stay in a drug treatment program instead of going to jail.

Reach Out to Harris Bricken to Learn More

If you have questions about the legality of psilocybin, Harris Bricken is here to help. We are an international law firm that prioritizes a tailored approach to every case we work on. We will work closely with you to understand your goals so we can create a strategy that can help you succeed and meet your objectives.

Contact Harris Bricken with your questions or concerns regarding regulations today.