When a company comes to one of our international manufacturing lawyers for legal help, we invariably ask them about their potential or actual overseas product supplier(s). We do this because of how critical it is that they choose the right manufacturer for what they will be doing.

I have easily given more than 100 speeches on how to protect your intellectual property when manufacturing overseas and I nearly always start that speech by stating that the following three things matter most for protecting your IP overseas:

If choosing a good overseas manufacturer is important for protecting your IP, that choice is even more important for ensuring quality product and on time deliveries.

The post nicely lays out the following four options for companies looking to have their products made overseas by a third-party manufacturer: 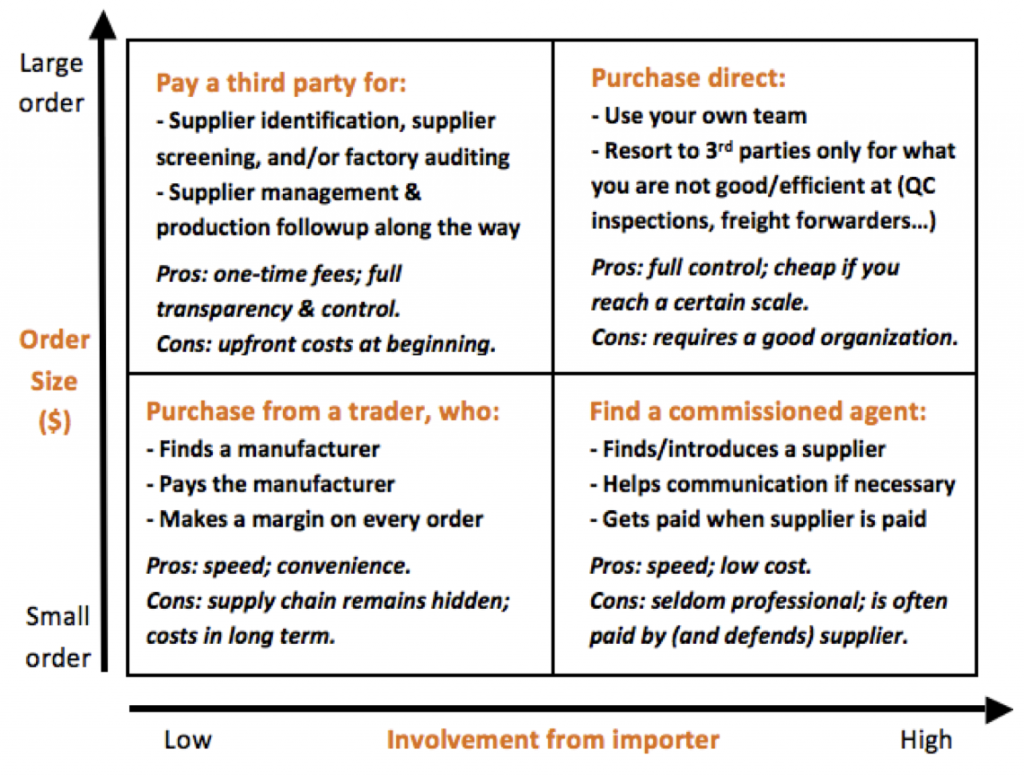 According to the post, 80% of importers go direct and thereby “control the whole process, and avoid paying commissions to any middleman or agent.” It states (and I agree) that “if you are organized enough to manage suppliers . . . .and if you can satisfy the minimum order quantities (MOQs) of suppliers, this is probably the best option for you.” I would, however, add “knowledgeable enough” to this sentence.

The post then discusses how over 90% of sourcing agents get a hidden commission from the factory and it calls this “normal business” and how when things go wrong, sourcing agents “often tend to defend the factory!” I agree with this too and this post even quotes me for that number (which I still believe to be about right):

Dan Harris has a similar view of most agents:

I often describe China sourcing agents with the following: “Ninety percent are crooks or incompetents and most are both of these things. But ten percent are worth more than their weight in gold.”

Perhaps most importantly, the post lays out key questions you should ask potential sourcing agents before you engage one:

These are all great questions. When our clients ask one of our international manufacturing lawyers to refer them to “good sourcing agents,” we typically ask them the following three questions:

We ask the second question because sourcing agents can charge differently and some are less flexible than others. Generally speaking, the more you pay up front, the less you will pay in total over time. Some sourcing agents require a large upfront payment to get started and others are willing to work on a percentage basis. Our start-up clients tend to prefer paying a percentage per widget manufactured and our bigger clients tend to prefer paying upfront.

We ask the third question because most sourcing agents are good with only a few countries.

One of the things you need to beware of with sourcing agents is that many of them want you to believe they are not sourcing agents, but that they themselves own the factory. This is an incredibly common lie and it is common because so many companies fall for it, usually to their detriment. The sourcing agent will talk about “our factories in China or in Vietnam” as though they own them even though they merely work with them. This difference really matters and I will use IP protection as an easy example of why it does.

We are big fans of using NNN agreements with overseas factories). If you don’t know the identity of the factory manufacturing your goods, an NNN agreement with them is out of the question because you can’t enter into a contract with an unknown company.

What about just having an NNN agreement “with everyone” involved with your product? Sure, but that will not cover the various other forms of liability – not even close. It will only hold counter-parties liable for misusing your IP.  What about bad product? What about late deliveries?

The following are just some of the instances where companies got in trouble by using third-party sourcing agents without contracts to protect them.

We could go on and on with the sourcing agent horror stories but I trust the above should be enough to make you feel uncomfortable with believing that using a “local” sourcing agent will reduce your overseas manufacturing risks.

Dan Harris is a founding member of Harris Bricken, an international law firm where he mostly represents companies doing business in emerging market countries. Most of his time is spent helping American and European companies navigate Asia by working with the international lawyers at his firm in setting up companies overseas (WFOEs, Rep Offices and Joint Ventures), drafting international contracts, protecting IP, and overseeing M&A transactions. In addition, Dan writes and speaks extensively on international law, with a focus on protecting foreign businesses in their overseas operations, especially in Asia. He is also a prolific and widely-followed blogger, writing as the co-author of the award-winning China Law Blog.